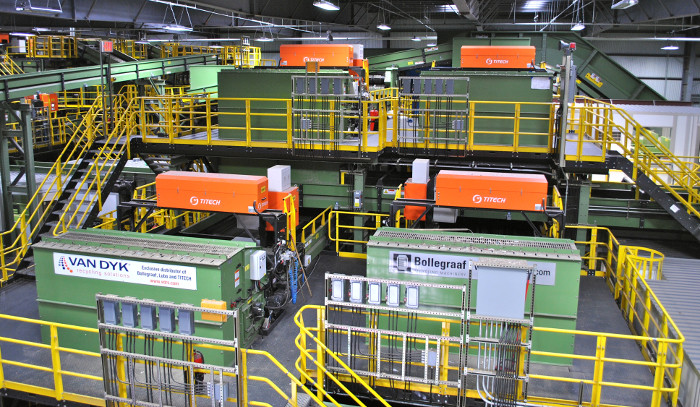 APRIL 2014 – With more than 8.3 million people living within its borders, New York City is the most densely populated major city in the United States. However, the city recycles just 15 percent of its waste, less than half the national average of 34.5 percent, according to the U.S. Environmental Protection Agency.

Michael Bloomberg, New York City’s former mayor, announced last July several efforts to boost recycling rates in the city to 30 percent by 2017. To double the city’s recycling rate, Bloomberg announced a recycling campaign, “Recycle Everything,” as well as expansions to its composting program and the types of plastics accepted for recycling. (The city had only accepted PET [polyethylene terephthalate] and HDPE [high-density polyethylene] plastic bottles and jugs prior to the program expansion.)

The city was able to collect all rigid plastics in the first place as a result of its partnership with Sims Municipal Recycling (SMR), a division of Sims Metal Management, headquartered in New York. The long-term contract between SMR and the New York City Department of Sanitation (DSNY) grants the recycling company responsibility for processing all of the city’s curbside residential metal, glass and plastic recyclables.

SMR opened the Sunset Park Material Recovery Facility (MRF) in December 2013 to serve as an anchor to the city’s curbside recycling program.

“We know there is huge potential for growth for the recyclable diversion rate in New York City,” Outerbridge says.

While the facility is accessible by barge, rail and truck, the majority of inbound material arrives by barge and leaves by water transportation and rail. DSNY collects and drops off recyclables at the Brooklyn MRF, as well as at Sims’ facilities in the New York boroughs of Bronx and Queens and in New Jersey, and SMR is responsible for processing and marketing the material, according to Outerbridge.

He adds that the Sunset Park MRF’s barge access area, which is big enough to accommodate two barges side by side, makes the Brooklyn location ideal.

Outerbridge says that by using water transportation more often, DSNY collection trucks will cut 240,000 miles yearly from New York City’s roadways. The move will reduce congestion, fuel consumption and travel time as well as improve air quality, he says. Outerbridge explains that, for SMR, having water access is vital. The location also is centrally located relative to the company’s three nearby facilities.

“This facility provides good geographic distribution to our other facilities to minimize routes for collection trucks. That’s first and foremost why this location is the best,” Outerbridge says.

He continues, “Another positive attribute is that it’s on the waterfront in a heavy manufacturing zone and is one of the last waterfront barge accesses, which is critical to our business.”

Just as the use of barge transportation will save collection trucks thousands of miles of driving and related emissions each year, the Sunset MRF itself has numerous sustainable features.

“They make decent business sense,” he says of the solar panels.

And, the buildings, wharf, recycling equipment and electrical substations were raised 4 feet higher than city building requirements, using more than 5,000 tons of recycled glass aggregate blended with 20,000 tons of mole rock leftover from New York City subway construction projects. The purpose of the higher elevation is to keep the structures from being damaged when the sea level rises and during storm surges, which was the case during Hurricane Sandy when all buildings and equipment remained dry.

SMR says a 100-kW wind turbine is in the works for this year as well.

The facility’s $110 million price tag— paid by SMR, DSNY, the New York City Economic Development Corp. (EDC) and the city’s Department of Small Business Services (SBS) as a joint project—included construction of the MRF and wharf as well as equipment and underground utilities and dredging, Outerbridge says.

The Sunset Park MRF is equipped with a Bollegraaf processing system designed by Van Dyk Recycling Solutions (VDRS), Stamford, Conn. It can process 1,000 tons of materials per day and features 16 of the newest Autosort models of optical sorters from TOMRA. Other equipment includes balers from Harris, Cordele, Ga.; a slow-speed shredder from SSI Shredding Systems, Wilsonville, Ore.; ballistic separators from Altshausen, Germany-based Stadler; and magnets from Steinert US, Walton, Ky.

“All of the equipment in this MRF we operate in another form elsewhere but nothing on this scale or this assembly of this equipment,” Outerbridge says. “It’s a lot more equipment than you would see in your typical MRF.”

When the material arrives at the Brooklyn-based MRF, Outerbridge explains that it travels from the tipping area through a slow-speed shredder and then passes over a disc screen, which removes the glass. The recovered glass then moves under a drum magnet, which removes ferrous metals. A trommel separates tin cans from smaller metal objects, while an eddy current removes nonferrous metals. Tin cans travel under an air system to remove any plastic bags and then are densified in a tin can baler. Bulky metal is barged to Sims facility in New Jersey.

The glass then moves under an air system to remove any labels before it is transferred to SMR’s glass plant in New Jersey.

All of the material that is left on the conveyor line goes to ballistic separators, which remove film and paper from plastic bottles, cans and cartons. The plastics go through a series of optical sorters, which recover segregated streams of colored HDPE, white HDPE, polypropylene (PP), PET and aseptic cartons.

Outerbridge says the city’s recycling program has been simplified for residents by adding a number of other recyclables and officials hope to see collection volumes grow as a result.

“We hope to see an uptick in all recyclables that we receive,” he says.

To increase the amount of tonnage collected, Outerbridge recognizes that the Sunset Park MRF is reliant on public participation. Awareness is critical, which is why there is a recycling education center on site that features classrooms, a theater, interactive exhibits and an area to view the recycling operations, he says.

Students, residents and interested visitors will be able to watch barges unload into the processing and tipping areas. Those who already have witnessed the Sunset Park MRF’s daily operations have been impressed, Outerbridge says.

“People are taken aback; they have no idea the amount of work and effort that truly goes into turning mixed recyclables into raw materials,” he says.

Outerbridge continues, “We are entirely dependent on public participation, so the extent to which that contributes to public awareness, enthusiasm and interest in the recycling program, that’s the direct connection between the education center and the business.”

SMR is still working toward its 75-person hiring goal; Outerbridge says some of these positions have been filled but the MRF is currently running one shift, “easing into operations.” He explains that the company wants to run three shifts—two working shifts and one for cleanup and maintenance.

“It’s going extremely well, our only challenge is to complete our hire rate,” Outerbridge says of the MRF’s startup.

When Sims Municipal Recycling (SMR) set out to build the Sunset Park Material Recovery Facility (MRF) it had a key advantage, says Tom Outerbridge, general manager of SMR. It had been processing New York City’s MGP (metals, glass and plastics) for several years in its Jersey City and Queens locations, which provided the company with a tremendous amount of data about the materials stream.

Creating the new facility would not be like building any other MRF. The system would be designed to process the bottles and cans coming from the dual stream collection program. Sims’ experience, however, told it there would be paper in the stream. As well, there would be a high volume of plastic bags to deal with, and the overall material volume meant the system would need high processing capacity. In addition, the MGP stream can include bulky metal, bulky plastics and other large objects.

The volume and material characteristics made designing the plant a challenge; but Sims had great data. Armed with that data it went looking for a qualified equipment supplier. After an exhaustive RFP and examination process the company settled on VAN DYK Recycling Solutions (VDRS), Stamford, Conn.

“It really came down to the design,” says Outerbridge. “We felt that the VAN DYK plant design was the best. We also are familiar with its equipment and knew that it had a proven track record of making sophisticated plants work, and were comfortable with its technology partners, notably Bollegraaf and TOMRA.” 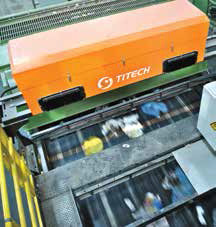 The Sunset Part facility relies heavily on advanced TOMRA optical sorters. In all the plant employs 16 optical sorting units. The sorters are TOMRA’s newest AUTOSORT 4 models. They eliminate the lamps and introduce FLYING BEAM® technology. They identify and sort 12 different commodities for SMR.

The inbound material contains a lot of debris. “Many people think it’s garbage,” says Outerbridge. Nonetheless, the Bollegraaf system produces highly marketable, very clean commodities. “Our material is beautiful. We can compete with the output of any other MRF,” adds Outerbridge. “We’re extremely happy with the system.”

From design through commissioning to full time operation Van Dyk has been hands on. “We had confidence because we knew that VAN DYK has tremendous experience as a systems integrator. Everything has basically worked as planned, and this is a very complicated plant,” Outerbridge says.

“Our operating team continues to work with Van Dyk for support and training, to ensure we keep the plant running at optimal levels. That’s important to us because the materials keep coming,” Outerbridge adds. “We’re very pleased with the plant performance and with our decision to select Van Dyk for this project,” he continues.

Van Dyk is the exclusive distributor of Bollegraaf, Lubo and TOMRA machinery in North America. Specializing in proven technology for sizing, sorting recovering and baling recyclables its turnkey approach and commitment fully equips operators from design, installation, training and lifelong support. This has led to more than 2,400 profitable plants operating in North America.

Reprinted from Recycling Today with permission.