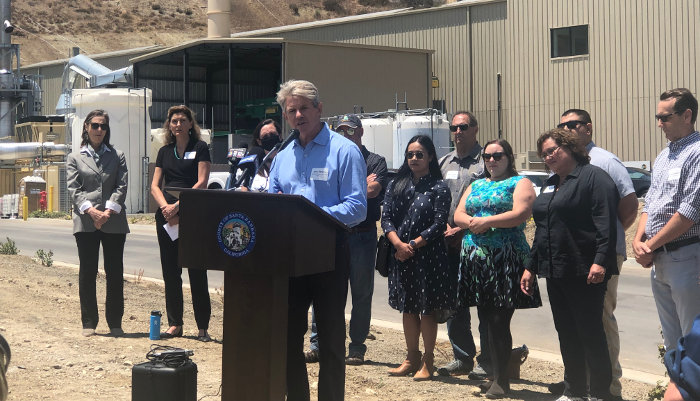 July 20, 2021 – Friday, July 16 saw a gathering of county officials, staff, engineers and contractors at the Tajiguas landfill in Santa Barbara, CA for the grand opening of the County’s new recycling and waste management facility. The ReSource Center will allow the county to truck in and process its own waste, turning it into recyclables and renewable energy rather than sending it to landfill. The facility will boost the county’s diversion rate by 60%, to a total diversion rate of 85%. Drastically reducing the amount of material buried will help extend the life of the landfill by a decade (the landfill was previously projected to reach capacity in the next few years).

The ReSource Center will accept solid waste from the South Coast and Santa Ynez Valley areas of Santa Barbara County, including the unincorporated communities of these areas as well as the cities of Santa Barbara, Goleta, Solvang, and Buellton. Joan Hartmann, Santa Barbara Supervisor, said at the opening that the facility “allows for recycling and reuse of materials, turning a liability into an asset.” She added that the site is the single greatest reduction of greenhouse gasses in the county.

The ReSource Center brings in 600-700 tons of waste per day and around 150-180 tons of recyclables. Its massive state-of-the-art sorting facility sorts through the waste and separates it by size, weight, density, and composition. The MRF equipment was supplied by Van Dyk Recycling Solutions of Norwalk, CT and includes size reducers for liberating bags, 3D trommels, anti-wrapping screens, air density separators, elliptical separators, 11 optical sorters to identify recyclables by composition, and a high-capacity baler from Bollegraaf Recycling Solutions. The MRF is operated by Marborg Industries.

The county anticipates processing between 150-180,000 tons of trash and recyclables every year. Referring to the county’s commitment to having a recycling, renewable energy, anaerobic digestion, and composting facility all on one site, John Dewey, CEO of Mustang Renewable Power Ventures, the project developer, said, “Nobody else has done it like this in a single location with all these various components.”

In addition to recyclables, the ReSource Center also recovers organic material such as food scraps and other wet, heavy material. Organic waste makes up around 40-45% of the county’s trash. Once recovered, this waste is transferred up to the anaerobic digestor on site, where it is dumped into heated tunnels and sealed airtight. It is then pumped with a mixture of 97% water and 3% cattle manure to start the digestion process. The natural bacteria in the manure breaks down the organic waste to produce methane gas. The methane gas is then harnessed to create renewable electricity that is sold back to SoCal Edison (Southern California’s primary electricity supply company). The electricity produced is enough to power the Resource Center itself, as well as about 1000-1200 homes. Additionally, the amount of carbon emissions contained in this process is the equivalent of removing 29,000 cars from the road each year.

But the process is not over yet. The leftover material in the anaerobic digester tunnels is then sent to the site’s composter, where the last bit of glass or film plastic is removed and the remaining compost is dried out. The county already has demand for the compost from local farmers. The compost machinery is a densimetric table supplied by Van Dyk with manufacturer Allgaier Process Technology.

Leslie Wells, Deputy Public Works Director, says the facility allows Santa Barbara to take responsibility for its own waste material and turn it into benefits for the community.

For more information on this project, visit www.LessIsMore.org/ReSourceCenter.